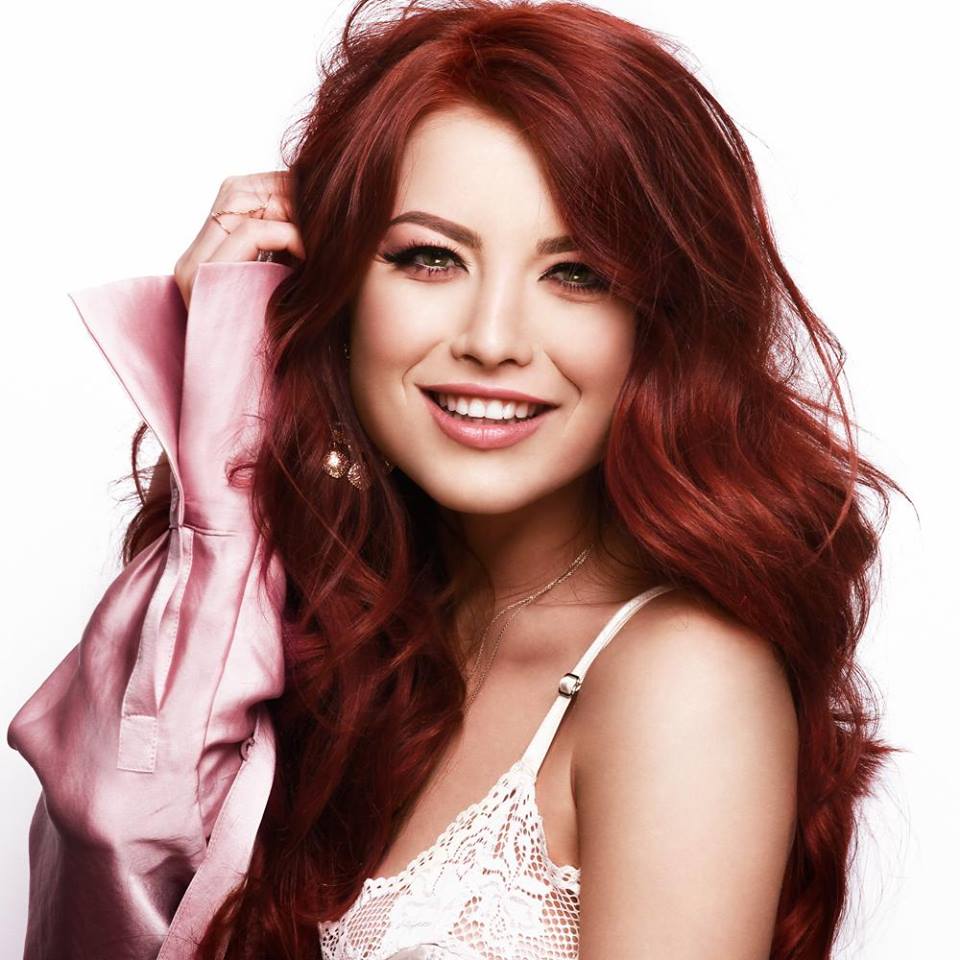 Elena Gheorghe was born on July 30, 1985 in Bucharest.
She is one of the most beloved Romanian singers, that have a sparking rise in music industry.

Family: Elena Gheorghe is half Aromanian, half Ardelean and she comes from a family of priest and believes strongly that the most important thing in the world is her family. Has a sister, Ana, journalist, and a brother, Costin, the footballer of ‘Sportul Studentesc’. Her mother, Marioara Man George is a singer of aromanian popular music and was the one that inspired Elena’s love for music.

Early career: Elena debuted on the music scene when she was only 3 years old, singing with her mother a popular romanian song Sus în Deal în Poieniţă. She sing along her mother for the majority of popular romanian music events. At 11 years Elena joined the Children’s National Palace where she took singing lessons, then go with the Harmony Circle soloist who participates in many contests, and tournaments around the country. In 2000 she won the gold trophy Little Bear contest(Baia Mare – Romania). In 2001, at only 16 years old, Elena participate at the Mamaia Festival , one of the most significant festivals of theRomanian music industry. Here she wins an unforgettable experience and also a friend, Adela Popescu among which later formed the band Viva.

Career: In 2003 Elena became the soloist of Mandinga, a latino band, a project that was to enjoy great success. In June that year, they played in the opening of Rafaga band and during the same month Mandinga released their first album De Corazón. In 2005 the band was placed 4th in the Romanian National Eurovision Selection with song My sun. Their album My sun was awarded a Golden disc one year later.

In January 2006 Elena opened her own dance school called Passitos and a month later ended the collaboration with Mandinga, starting her solo career with the help of musical producer Laurentiu Duta.
May, 2006 – Elena shoots her first music video for the new project – Elena, for the song Your Voice;
June, 2006 – she released her first solo album, Your Voice album that contains the super-hit My Sun;
August, 2006 – Elena sustain a recital in the opening of Vaya Con Diosband;
February, 2007 – she shoots at the Atlantis Studios the video for Your Brown Eyes song;
March, 2007 – Elena won the Radio Romania Actualitaţi prize for best performing act in 2006 and was nominated at the Best Song of 2006 section with the song Your Voice;
August, 2007 – at the Romanian Top Hit Music Awards, Elena song Your Brown Eyes won the award for Best Song of 2007;
December, 2007 – Elena released the video I adore you from the album with the same name; the song entered first positions on charts and heat the spirits in the summer of 2008;
September, 2008 – a triple release took place in at the TV-show Sunday in the family: Aromanian music album – Lilicea Vreariei (Elena is the first artist who released an Aromanian music album to Romanian music market), the pop-latin album – I adore you, and the video for the song To the stars;
December, 2008 – she was rewarded by Aromanian Community for the Aromanian music album – Lilicea Vreariei;
January, 2009 – Elena opens a fashion workshop;
January, 2009 – she wins Romanian National Eurovision Selection with the song The Balkan Girls;
March, 2009 – shoots the video The Balkan Girls and in the same month her song To the stars becomes number one at the main romanian radio stations;
April, 2009 – Elena starts a promotion tour for The Balkan Girls in Germany, England, Belgium;
May, 2009 – Elena represents Romania at Eurovision Final in Moscow, ranking number 19 and gained international experience;
July, 2009 – Elena is involved in several humanitarian campaigns: Chance at life, an opportunity to new memories, a humanitarian campaign for children with heart defects, Stop sexual abuse of minors, Young hopes ;
September, 2009 – she sings at Days of Bucharest with an orchestra formed of 100 instrumentalists;
March, 2010 – she gets involved in several aromanian music projects;
May, 2010 – Elena released her new video for the song Disco Romancing, that becomes a number one at the main romanian radio stations;
November, 2010 – Elena released her new single Midnight Sun;